During low tide the water recedes a long way back, but during high tide the sand is all covered but still not very deep.

The wifi seems to be rather hit and miss and more often miss than hit.

When we arrived it seems quite good but it now seem to be worse than ever.

Vodafone in Fiji also seems pretty hit and miss .... this morning getting about 4KB/s and this evening 180Kb/s.

Today we left New Zealand - the cats & dogs were rounded up and delivered to their holiday retreats - Top Notch for the dogs, and Cat Habitat for the cats.

We then drove to the airport and parked our car at Air Park Canterbury for a cost of $80 which is better than the airport at $127 - but still a lot to just leave your car. We then were dropped off at the airport by Air Park Canterbury.  We found the right place to check in and since there was no one in the queue we were quickly processed. They even weighted our hang luggage which was a first at the check-in counter.

A few hours at the airport and we board our 737-800 which was like a normal Air New Zealand CHC-AKL aircraft with little screens above the seats about every 4 rows.

Even business class did not have screens but I noticed they were given an IPAD each.

We departed and were given a pretty simple little meal as our departure time was 2:35 but we left 15 minutes late as they had unload a families bags as they did not make it through immigration for some reason.

After about 3 hours & 45 minutes we arrived in Nadi, with a quite quick process entering the county we went to get some cash from the Westpac in the terminal. They charge $15 Fiji to make a withdrawal in addition to what ever your own bank will charge.  Typical Westpac - no wonder I dumped them a few years back.

For some reason Vodafone and the other local carrier offer you a free sim card with 1GB of data if you sign up for it. I did not bother, even the transfer company offered a free sim with 2GB of data....

We were no sure if we had a private transfer or a shared one, well shared it was and we got seated on a huge 44 seater bus to wait for another couple to arrive. A couple did arrive after 15 minutes and then we were told to take a little 10 seater coach which was OK but was very squeeky. So it was now about 8pm.

The bus ride to the Hideaway Resort And Spa took 1 hour and 40 minutes to arrive. I think a total of about 100KM from the airport.

We checked into our room which is nice and spacious but looking a little dated as well.

We will be staying at the Fiji Hideaway Resort and Spa in Fiji. 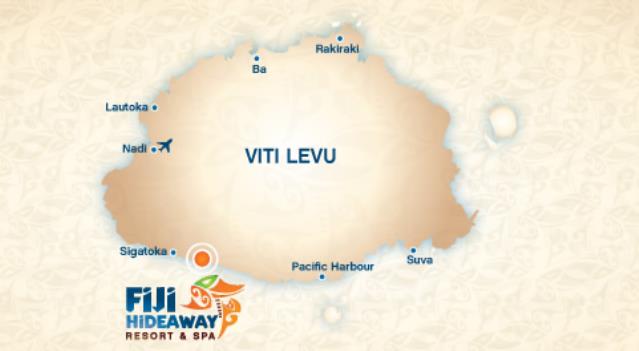 It is a 90 minute drive from the airport and we have transfers included in our price. 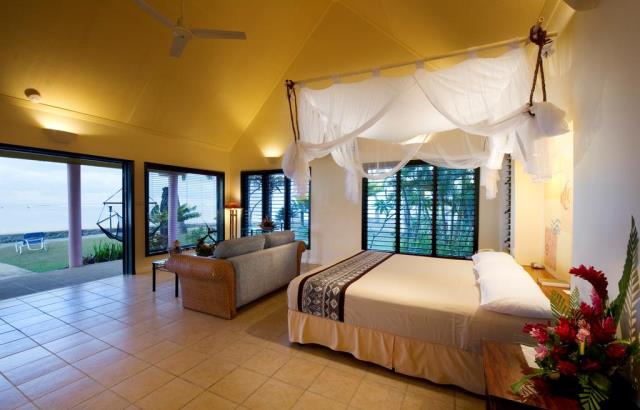 I believe that our room will be like this and is one of the little purple ones in the image below. It is called a beachfront villa. 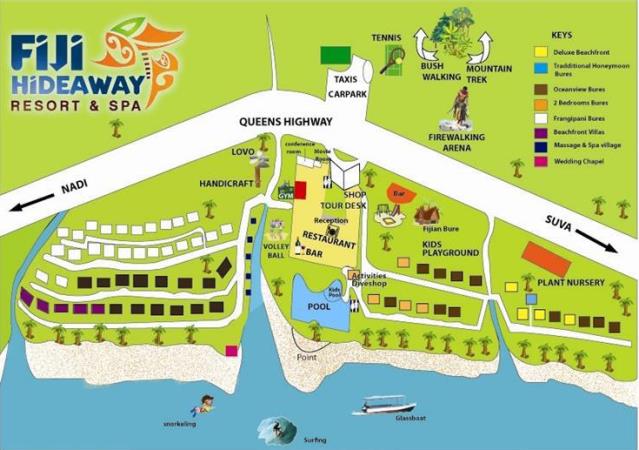 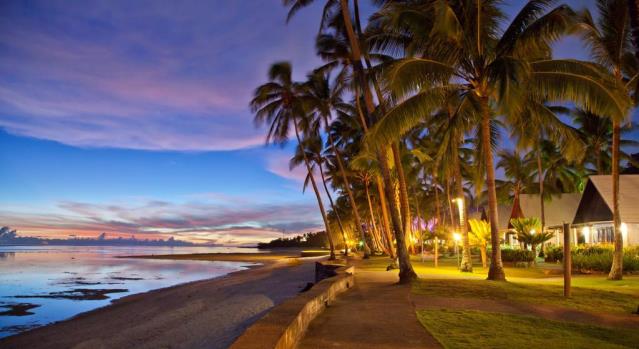