We got up early for our 7am flight to Sharm El Sheikh, and had arranged a vehicle to take us to the airport. We got to the airport just after 5am - far too early - but it was ok.

We checked in and then waited until about 6:45am to board. We had to get a bus from the terminal to the plane.

You can see the terminal, the plane and the bus I took with my BlackBerry. 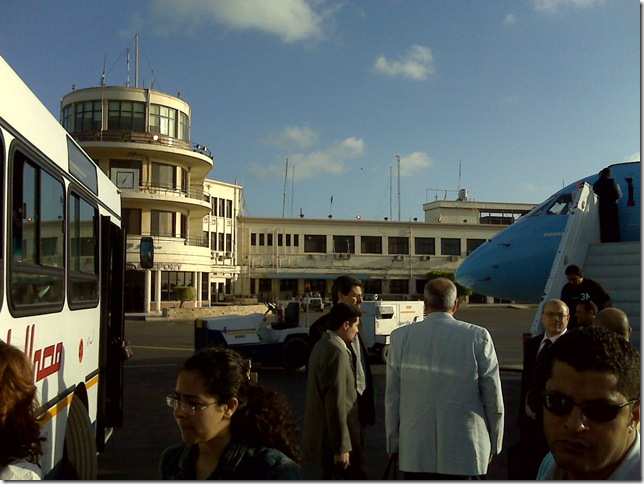 So we caught the bus from the terminal, and it did a u-turn and we got off and boarded the plane.

We sat on board for a while and it appears something was wrong and in the end we all had to get off again at about 7:15 - technical problems.

We went back in to the terminal ( we had to take the bus for the return journey of 100 feet ) and wait for about an hour or so.

We then again had to take the bus to the plane and this time we took off for Sharm El Sheikh.

The flight was about 1 hour. The area around Sharm El Sheikh is definitely desert and rocks, although there is a nice new airport to greet us when we arrived.

Day 3 in Alexandria was quite quiet for us. The weather had changed from day #1 when it was 39 and it was a cooler 24-27 which was actually feeling almost cold.

Pam & I discussed the temperature and 24-25 felt like 18 in Christchurch.

We went for a walk down to the new Library a walk of about 2-3 KM. 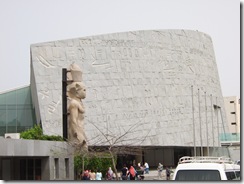 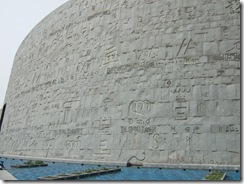 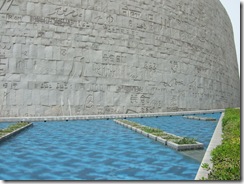 When we arrived we decided not to go in and rather had a coffee in a cafe there. 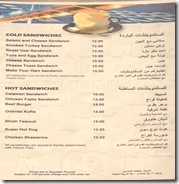 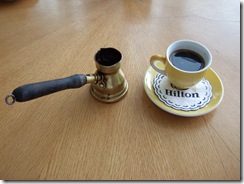 We took some photos of the hotel which had a pretty funky lift. 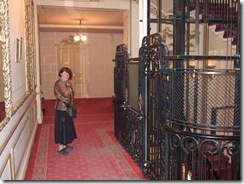 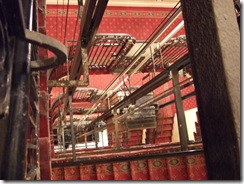 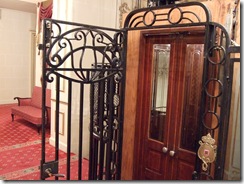 The hotels main dining room had some very old art on the walls on also frescoes on the ceiling. 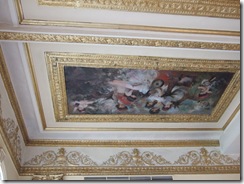 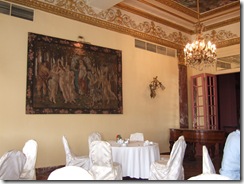 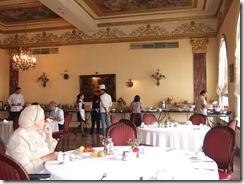 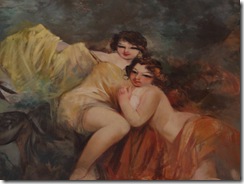 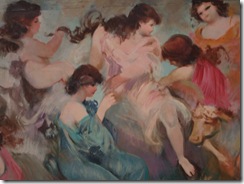 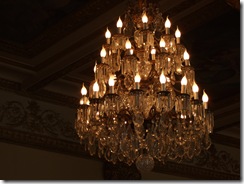 I spotted these men fishing from the hotel window so I ventured across the mad road to take some photos, it was a real shame in the end as it took 12 men to get basically 6 squid and some other tiny fish. 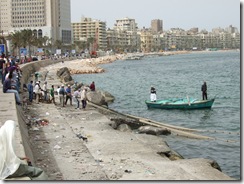 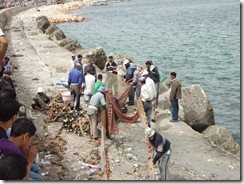 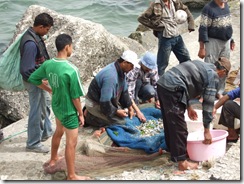 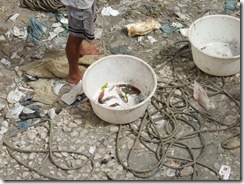 Pam and I were very tired yesterday and fell asleep at about 4pm. We missed dinner and woke about 6am the next morning, we must have been buggered.

It got to 39 degrees yesterday and the sun was very intense.

So we woke early and were quite hungry since the food in Egypt is obviously not something they live for but exist on. We went down to the restaurant for breakfast at about 7:30am and they had a very good spread on.

Lots of pastries, salads, cheese, lunchen, foul (Fava Beans), Eggs, Funny little sausages and fruit. So quite a selection from what we have seen to date.

We ate a few different things and had an extremely weak coffee - they ask would you like an American coffee?, but there is no other on offer as I found out when I asked for a Turkish coffee.

The beans are pretty bland, almost watery flavoured, and this is what Egyptians live on!

The basic diet of Egyptians appears to be :

I think that is it for what they eat, the food scene obviously never happened here and this is indicated by the sever lack of any real restaurants or foods. Alexandria has not much in the way of restaurants that you would go to and most are more Western if you did want to go. A lot of the places people hang out at look pretty seedy and do not appear to sell food just tea and Sisha Pipes. 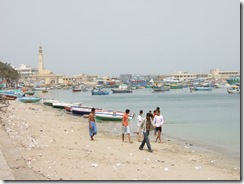 We went for a walk this morning along the "Cornish" which is the road along the harbour. It took us a while to get to the end and overall quite disgusting and filthy.

They even have what looks like a private beach, enclosed by wire fences, but full of litter like the rest of the city.

The beaches are disgusting and it would only take someone 30 minutes a day to keep them clean but they don't  - full of crappy litter everywhere.

Every pavement although appears to be new is broken at every corner with ditches in the middle of the footpaths. Most people walk on the roads since they are in better condition. 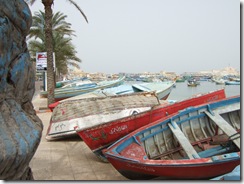 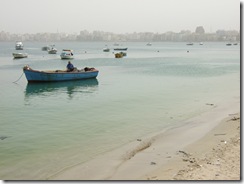 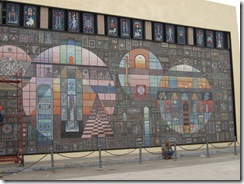 We are starting to think "why did we come", but we are still having fun, but it is not as nice as Croatia, Morocco, The Greek Islands.

We walked around to a place called the "... Fort", where obviously tourists congregate since there were tour buses and people around and lot of people selling tourist stuff. Mainly shells, plates, jewelery, and stone figures. 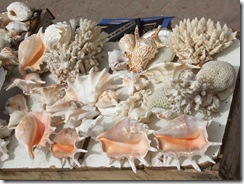 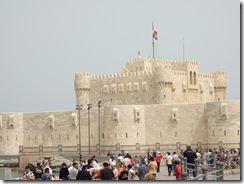 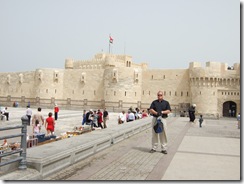 We walked off the beaten path and felt rather uncomfortable the further up the street we went and decided to get a taxi back to the hotel. We flagged a cab over, he did not speak or understand English. He could not read Arabic (we have a card with details of where our hotel is in English and Arabic).

We bartered via a 3rd party on the road through the taxi windows and I ended up getting it for 5 pounds. He was the craziest taxi driver ever - I wish I had a video of it.

He decided we should listen to Arabic music "real" load, and then he turned the corner to pickup someone else. I told him to bin the other dude or we are walking. He obviously understood this as he kicked him out. He then turned the music up more and I gave his a small down symbol with my hands and he reduced the volume a bit.

He drove on the wrong side of the road most of the way, we were literally 1 inch from car beside us stuck in traffic, we cut in front of the tram and basically anyone in our way. He just about knocked down a cop, and a woman and lots of vehicles. A video of this would have been great.. Maybe tomorrow.

So we safely get to the hotel and I give him my 5 pounds, and he gives it back to me. I was unsure of why but I think he wanted more, I said no and got out and walked away.

We decided we needed food and ordered room service, I said I wanted a burger but was told it was not available, so we ordered some calamari (squd) and a roast beef bun.

We then had a lady from some other part of the hotel come and I told her I did not want to pay their cost and wanted to buy it on the street. She also did not know where she was when shown a map, but basically told me where I can get the tonic water from - well sort of told me in 1/2 English and 1/2 Arabic.

The food then turned up and we had about 5 people in our room. Soon after a person from room services rings to tell me that a can of Tonic Water would cost 13 pounds.

I decided at some point in the afternoon to find the tonic water out on the street, apparently it was next to a chemist. So I left and wandered down the broken pavement looking for the chemist. I found what was a chemist and wen

We left the Hotel Long Champs yesterday but not before I broke their shower. It was not working properly and I shook it and the shower end broke off.

We caught a taxi to the Train Station. 15 Pounds, no real dramas there.

We arrive at the train station at 8:20am and our train was due to depart at 9:00 so not too long to wait. We get a few people wanting to help us, wanting tips.

The train was quite spacious but not very clean. We were in a 1st class, air conditioned carriage so we were quite comfortable. The seats were comfortable and reclined quite a bit.

A lady came down the isle and asked if we wanted breakfast?, I tried to ask if it was included in our ticket? She said something and walked off and a few minutes later a guy dropped off a plastic box of pastries and a bottle of Mango Nectar.  We assumed we would have to pay for these and in the end they cost 20 pounds each. It was quite dry being bread rolls stuff like that and we ate hardly any of it, so overall not really worth having.

The train travelled through the country side which was nice to see instead of a concrete city like Cairo. The fields were green as far as the eye could see. They have a very good irrigation system as everyone's fields seemed to have enough water.

We arrived in Alexandria at about 11:45am and quickly found a taxi after a bit of bartering and ended up paying 10 pounds for the taxi to our hotel "The Windsor Palace" a 4* hotel.

Once you step inside the lobby you are greeted with a nice clean environment, with lots of staff around. We check in and they give us a welcome drink while they sort out our room. I placed my drink (1/2 drunk) on the table and a lady came and took it away, I thought she may have gone to fill it up but she never returned.

The hotel has an amazing lift and I will post some images when I can.

Our room is nice, quite large, and we have a balcony where we can see the harbour.