Today is Monday and it is time to depart Poggioraso and drop the car off in Bologna and catch the train to Venice.

Well we woke early 6am, and cleaned up the house, and packed up the car and drove to Bologna. Just as we were leaving town the fog started to cover the mountains and the road. 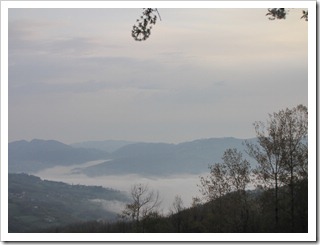 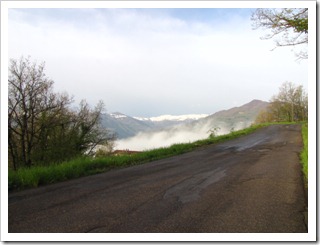 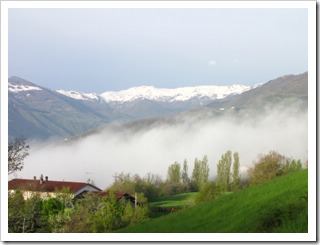 As we have driven a lot in Italy we have seen a lot of signs on the road with a photo of Deer. Well we actually saw a wild one today cross the road about 50 meters in front of us, just after leaving Poggioraso. Sorry no photos…

We arrive in plenty of time in Bologna and fill the car up with fuel ready to drop off at the Rental Car facility.

Some stats on driving:

We had completed dropping the car off at 9:20 and got them to phone a cab which they said would 5 minutes, but it only turned up about 25 minutes later. I assumed (wrongly) that the station was only about 1km from where we were but in fact it was a long way away. It cost 16.5 Euro to get to the train station.

We got there at about 2 minutes to 10 and we were planning to catch the 10am train.  We missed that and I was pissed off since I thought we would have had plenty of time.  We checked out the times for the next trains and there was one at 11:36am and another at 11:56. The 11:36am was a EuroStar fast train and the next a regional train.

We checked out the prices for the different trains:

We took the cheap option and waited 2 hours – We waited outside the train station and also in McDonalds which was clean and tidy but no Toilets that Pam could find.

I went across the street while Pam looked after the bags and had a espresso coffee 1 euro, and also a cappuccino 1.30 euro. The cappuccino was very nice but quite mild as far as the coffee portion went.

Remember: You must validate your train ticket or you can be fined! (we already validated it after we bought it). As soon as we got on the train and it departed the conductor came past to check out tickets. All OK

So we are in a regional train which is fine, it is comfortable and we could put our bags above our heads. I helped some American ladies who had very heavy bags to put them on the rack above the seats. I guess I will have to help them take them down when we get to Venice? 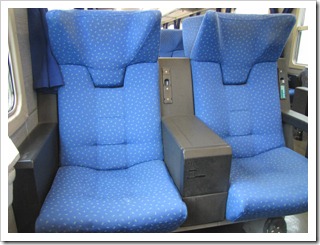 I am writing this as I am sitting on the train.. It is very cloudy outside so I guess Venice will be cool as well.

It is nice to not be driving……