Pam & I took a glass bottomed boat out for a one hour cruise. The boat was quite good with good viewing of the sea below but not as good as my view while snorkelling.

Pam and I are staying at the Halnan Marina in Narma Bay, this is a large hotel with lots of rooms all facing the bay. We booked this hotel on the Internet and did not know that our price was all inclusive, which means we get the following:

The drinks are free from 10am to 11pm everyday. At this point we have not had that many, but it is a nice thing if you do want a beer.

The weather here is good, only about 29 each day so not too hot.

We were talking to a barman last night and he said that during February, March & April Sharm is mainly visited by Russians. In fact our hotel would have 98% Russians I think.

We started to talk to a young guy from Moscow last night, Vladimir, he is 25 and works as a pilot for Aeroflot, the Russian National Carrier.  He was saying that he was offered the deal of flights, accommodation, all included, for $1800 USD for 9 Days. We may meet up again for a drink tonight in the bar again.

Sharm El Sheik is not like other Egyptian cities in that it is more of a party town as you will see from the photos below, but it is a nice change from Cairo and Alexandria. 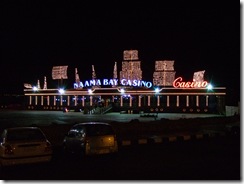 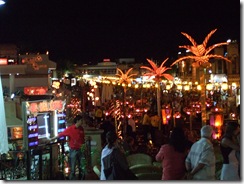 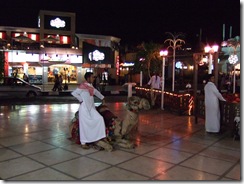 There are literally hundreds of restaurants along the street, most selling seafood in cabinets. This is in stark contrast to Cairo and Alexandria where you can hardly find anywhere to eat. 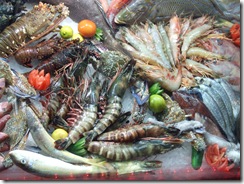 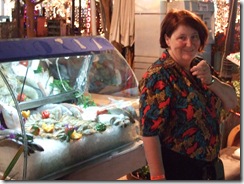 I wanted to go on an introduction to diving, but the place we went to wanted to know if I was on any medication, I am for High Blood Pressure, so they phoned a doctor and he said he wanted to see me (35 Euro) before he would allow me to do the dive so I flagged it and bought some a snorkelling mask and breathing pipe and snorkelled around the bay.

I bought a camera, basically disposable, but you can refill it to take underwater. I took all the photos (27) but I do not know what the pictures are like until later today as they are on film and we dropped it off last night to get processed.

There is some lovely fish just a few meters out from the shore, with wonderful colours.

In fact I may go snorkelling in a few minutes time......

The following panorama is made from a small video taken on Pam's camera. I then used a program called Virtual Dub to rotate the frames and extract every 30th frame. I then loaded the images ( there was 25 of them ) into Photoshop and told it to do a Photo Merge and got the following: